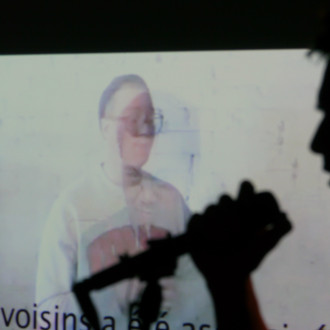 Is This a Joke?  is a video exhibition and the result of the following:
I approached several Montreal-based stand up comics of diverse origins, and asked each to allow me to

1) Interview them about the relationship between their cultural identity and their stand-up act,
2) Film them telling one joke of their choice which would refer to cultural identity in some way and
3) Consent to a group of culturally diverse actors to then memorize and re-tell their joke for the camera.=

The work was first exhibited in March 2014 at the Centre for Ethnographic Research and Exhibition in the Aftermath of Violence (CEREV) Lab. Click here for a written reflexion on the CEREV website.

A second, smaller version was shown in Berlin, at Mila Kunstgalerie in August, 2014 as part of the Intermezzo #2 group exhibit. This work was my final thesis project for an MFA in Creative Practice with Transart Institute (Berlin/New York) and Plymouth University (United Kingdom).

The accompanying thesis text has been published in book form. Click here to see more about the book.