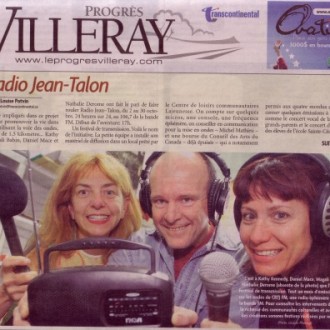 Radio Jean-Talon was a community project initiated by 4 artists, in audio art and performance. Kathy Kennedy, Magali Babin, Nathalie Derome and Daniel Mace wanted to create radio programming on the themes of neighbourhood, culture and storytelling. Stories about the people and activities in our neighbourhood were collected and developed in order to produce radio programming for local broadcast on both FM and web radio. This programming was presented during the Radio Jean-Talon Festival in September and October 2009.

My collaboration  hosting two programs weekly, Princesses Villeray (with Nathalie Derome) and Les gens du quartier, as well as editing a documentary about Islamic culture in the neighbourhood.